My gaming this year at Ghengis Con was a bit light.  I have learned that 2 RPGs a day is about  my limit.  Three in a day I can do sometimes, but lately, I want a break.  I have given up long ago playing board games there.  For boardgames, I just never can find what I want to play, and often when I do, I see it is with whom I normally play, but I have to pay a fee to play with them.  This year, I only did three different RPGs.

First up was Deathwatch (FFG):

Last year, I played this at GC with Jacob Burgess as my GM.  It was quite enjoyable, I decided to sign-up again this year.  Funny thing, last year, after the game, Jacob sought me out, couldn’t find me, and I was relayed the message that he had come by and said that we had gone to high school together.  I had NO recollection of him.  After the con, I pondered it, and then called my brother.  Eureka!  He had gamed, painted with my brother who was in his class (a freshman).  At the time, I was a senior.

Once again, Jacob put on a great game.  This adventure had us investigating a “minor” problem on an isolated planet in the quarantine zone.  As expected, not was all that it seemed, and we were drawn into a large battle with the greenskins.  In the end, we were successful saving the planet’s citizens and let the nobility die in a horrible, green death.  In all reality, we should have all died a valiant death saving the citizens, but Jacob let another player use my last fate point for a re-roll, thus allowing us to survive and fly off into the warp storm in our slightly damaged Thunderhawk.  I think I would have preferred the glorious death.

Next up was Call of Cthulu (5th, modern era):

Another enjoyable game, but with a few annoyances.  We were all scientists, or crew, in a South Pole research station.  Suffice it to say, people starting behaving oddly, we investigated, finding a mysterious new building in our immediate area with the aurora borealis being funneled down into it.  Truly, I enjoyed this game, but there were a lot of annoyances.

First off, the GM was good, but he spent the first 20 minutes of the game just expalining the layout of the base, and how things were connected to each other.  It was neat, but not needed.  He had just gotten back from the South Pole, and clearly loved it, but that level of detail is not needed.  Secondly, he often pushed characters with “idea” rolls when we were not “getting” something that he wanted or needed.  I think, in the end, that his mystery was just a bit too complex for the time we had.  Although, the crowd he had did not help.

The folks will show up again.  There were 4 friends (a couple and 2 friends) who always game together, and I must say, they are some of the most un-enthused RPGers I have experienced.  The female was given a character that is paranoid and sees conspiracy everywhere.  Perfect for CoC?  Yes!  Did she play it that way?  No.  She played her as logical, straight-laced scientist who required proof before action, so she never embraced the crap that was going down in our adventure.  Her husband, the medic, did nothing the entire game.  He did not even heal until the GM would prod him that way.  And a third of the group, did nothing the entire game that I can recall.  The last did well.

Lastly, this is something that I have noticed in all my games of CoC.   There is always one player who will act crazy, tittering the game to almost failure simply because they want to.  Now, in CoC, you can go insane.  You should go insane.  But your character shouldn’t do so just because you feel like it.  You need to to be affected by something first, and in each my games that i have played over years, someone just decides to got nuts almost driving the game off the rails for the GM.

Next up was Legend of the Five Rings (4th edtion): 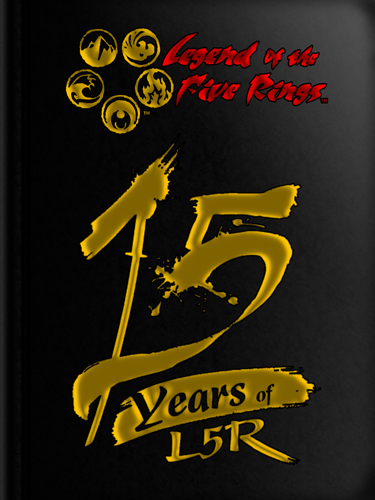 I have been wanting to try this RPG for a long time, but it never seems to be at cons.  I have played the CCG, and have always enjoyed that game and the world that it is in.  I had heard it was due to it being overly complex and difficult to run at con, but I didn’t see that as an issue.  What may turn-off folks is that it can be just a game of court intrigue, and that was basically our game.
We were all courtiers sent to a Lion clan stronghold to hold negotiations with the Lion clan to stop them from taking back lands that were supposedly Lion holdings that the other clans had taken from them.  In our game we had players playing Scorpion, Unicorn, Crab, and Phoenix (myself).  While there for the negotiations, the Lion clan leader was assassinated, we were tasked to solve the mystery of who killed him.

This game was great.  There was no combat, just mystery and court.  Loved it.  In the end, shockingly, it ended up being a conspiracy involving the Scorpion clan (who had an internal schism going on).  I would easily play again, and I would love to see what the combat is like (very deadly I have heard).

And, lastly, another game of Deathwatch:

Another mixed bag.  The game was great.  The players were not.  I was excited for this one as the GM was the designer, Ross Watson.  As you would expect he was a great GM.  However, the 4 from the Call of Cthulu game returned, and like before, they were as blah as before.  It did not help that none of them had any knowledge of the 40K universe.  I understand that is a risk in a con game, but they just didn’t seem to care or try.  The icing on the cake was the medical doctor in the last game.  He was a Blood Angel, and Ross explained to him that they are drawn to blood.  So, he was drawn to drink it as to opposed to fighting that urge so he didn’t succumb to chaos/temptation.  However, that wasn’t the worst of it.  He decided to write haikus the entire game about his love of blood and battle.  Once, was fun, but 4 hours?  Not so.  the worst part was that Ross LOVED it.  It could have been a nice addition to his character, but it is really all his character did.   I would easily play again if Ross GM’d again.  Great game aside from the 4.  Only 2 of us had any knowledge of the 40K universe, and it showed in our gameplay.

A gamer, a painter, and a reader.
View all posts by skippen →
This entry was posted in Gaming, Uncategorized. Bookmark the permalink.

Painting, Gaming, Reading, and Other Things that Happen in Life